Hi, all!  I have been away from Xanga for awhile.  Too involved with Face Book!  I need to quit playing all the games.  Not only have I been playing Farm Town, Farmville and Cafe’ World on my page, but I have been playing it on Dennis’ Face Book page, too!.  Then… to add to the craziness, I set up a Face Book account for our cat and have been playing on her site, too!  I think I am over the edge!  I am stopping the madness!  No more games for me.  I will keep them on so those of you who are my “neighbors” can still play and won’t lose points, but don’t bother sending me anymore “gifts” as I will just ignore them.  I got up to Levels 31-40 in the games, and I am actually getting a little bored with them, so it is a good time to stop.  (They keep you hooked, though, by adding seasonal items!  I may keep the Farm Town because I have a neat idea for after Christmas.  I may set it up, then leave after that.)  Do I sound like I need to go to the gamer’s equivalent of AA?  Maybe so!

As I am writing this, there is over a foot of snow on the ground.  It is starting to melt, so it looks kind of gray and ugly now.  The trees no longer have snow on the branches like they did the other day, so it is not as pretty out.  The “up” side is that it is warmer!  The balmy 32 degree temperature is welcome after having below zero temperatures with -20 wind chills!  Looks like we may have a white Christmas this year.

I emailed you about the losses some of our classmates have experienced lately.  Jim Landon’s son was killed in a car accident the end of October.  Linda May Houser’s dad died in November and Judy Mohatt Person’s dad shortly after that.  Our thoughts and prayers go out to our classmates and their families, especially this time of year when family means so much.  Two of my brothers and my sister died this time of year and I understand how hard the holidays can be initially.

Charlie was killed in car accident on Dec 16, 1975.  Floyd died the beginning of December in 1986.  He had spent that Thanksgiving with us, then Fred found him dead in his Lincoln apartment the next week.   I will always be grateful for that last holiday together.  He almost didn’t come that year, but decided he would make the effort.  I didn’t realize at the time that he had been sick and had had a heart attack earlier in the year in July.  It was quite a shock to me when he died.  Floyd had been out with a friend the day before to get a Christmas tree. He died quietly at home, his tree up but undecorated.  Christmas was always Floyd’s favorite time of year, so it seemed fitting that he would join Jesus for his birthday celebration that year.  Then, my sister, at age 56 (most of you probably didn’t know her.  She was 10 years older), died of a heart attack over Thanksgiving in 1997.

This Thanksgiving was nice.  We had our boys here and it was a fun time.  Dennis’ mom also made it down from Valentine.  She came the week before Thanksgiving, so spent two weeks with us.  Dave, Carlota and the baby arrived Wednesday night before Thanksgiving.  Their visit was short as they had to fly back to Chicago Saturday morning.  But we enjoyed the time we had with them. Mike went back to UNL the following Monday after Thanksgiving.  Anyway, we had a great time.  I always enjoy having all three boys home because they are so much fun!  They are very witty and throw “zingers” back and forth, often including their poor old mom in the jokes!  But I can take them on, too, and get my digs in as well. (I wonder where they get that from?) 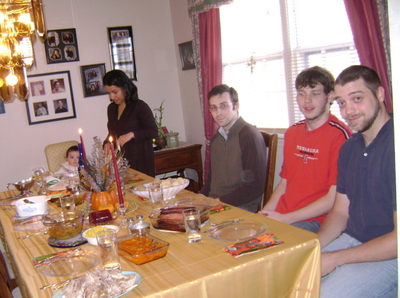 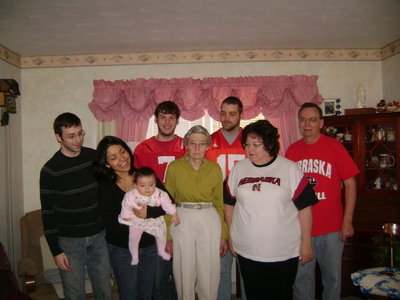 We thoroughly enjoyed having the baby here.  She is 8 months old and doing a lot of chattering and laughing.  She seemed to get serious, though, whenever the camera came out, as if she were posing. 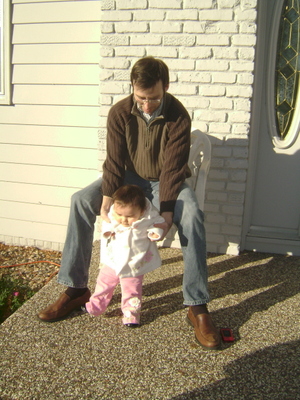 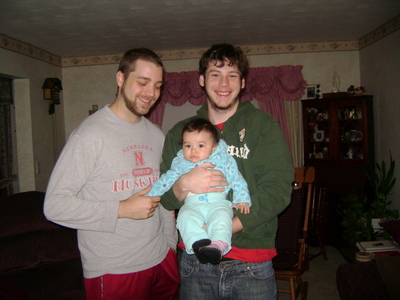 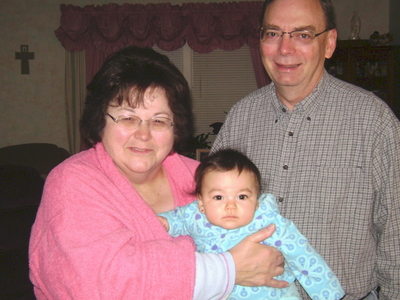 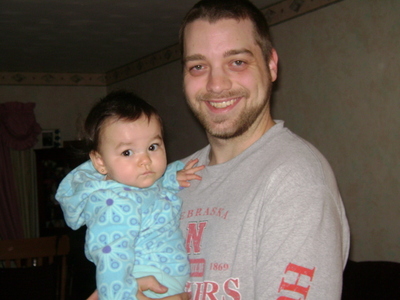 Our Christmas will be quieter with just Joe and Mike here with us.  I’m sure we will still have a wonderful time, though.  We are so blessed to have our family and friends.

I am almost done with my Christmas cards.  I made a silly letter this year that some of you received.  I could have added even more to it, but ran out of run. I made it like a newsletter and called it “The National Inspirer.”  I had stories like the “Octomom Bested” and told about Delilah Luz being born this year, but quality is better than quanity.  I wrote about how we attended my Aunt Ruth’s 100th birthday but didn’t crash the gates like the Salahi’s did the White House.  We attended legally, with no breach in security.  I told about our “Balloon Boy” who graduated from high school this year (celebrated with balloons) and how he is now at UNL and has been seen at football games where balloons have been released at the first touchdowns.  I told about how we are not leaving or retiring like Oprah, that we are still working at the same places and don’t plan to change networks.  I end the newsletter by saying, “No vampires, reality TV show contracts or publicity in our lives. Just wonderful friends like you!”  Later, I thought how I could’ve add other things, too.  Maybe that, unlike Kate and Jon, on the reality show “Jon and Kate Plus Eight, ” Dennis and I celebrated our 35th wedding anniversary this year (and without any golf clubs like Tiger Woods.)  Anyway, it was fun to write and I hope everyone enjoyed it.

I hope you are all well and that you have a blessed and spiritual Christmas.  Please remember our classmates who are still struggling due to unemployment or health problems.  I feel so blessed to have had you in my life and I wish you all the best!  Keep in touch! (And I will try to do better about posting on the blog.)