Before I get on my soapbox, I want to thank Vikki and Cheryl for their recent donations to the class fund.  We appreciate your generosity.  Thank you also to those of you who have given me pictures to scan for the DVD–Nick, Paula, Vikki and others.  Keep them coming!

Now to my soapbox–Do you guys hate “Forwards” as much as I do?  Oh, I enjoy a few–the jokes mostly.  But I don’t like the ones that claim some conspiracy or good luck if you pass them on.  This is one of my favorite “Forwards” because I TOTALLY relate to it!

SUMMARY OF MY LAST YEAR ON THE COMPUTER

I must send my thanks to whoever sent me the one about poop in the glue
on envelopes because I now have to use a wet towel with every envelope that
needs sealing.

Also, now I have to scrub the top of every can I open for the same
reason.

I no longer have any savings because I gave it to a sick girl (Penny
Brown) who is about to die in the hospital for the 1,387,258th time.

I no longer have any money at all, but that will change once I receive
the $15,000 that Bill Gates/Microsoft and AOL are sending me for
participating in their special e-mail program.

I no longer worry about my soul because I have 363,214 angels looking
out for me, and St. Theresa’s novena has granted my every wish.

I no longer eat KFC because their chickens are actually horrible mutant
freaks with no eyes or feathers.

Thanks to you, I have learned that my prayers only get answered if I
forward an email to seven of my friends and make a wish within five
minutes.

Because of your concern I no longer drink Coca Cola because it can
remove toilet stains.

I no longer can buy gasoline without taking someone along to watch the
car so a serial killer won’t crawl in my back seat when I’m pumping gas.

I no longer drink Pepsi or Dr. Pepper since the people who make these
products are atheists who refuse to put “Under God” on their cans .

I no longer use Saran wrap in the microwave because it causes cancer.

And thanks for letting me know I can’t boil a cup of water in the
microwave anymore because it will blow up in my face…disfiguring me for life.

I no longer check the coin return on pay phones because I could be
pricked with a needle infected with AIDS.

I no longer go to shopping malls because someone will drug me with a
perfume sample and rob me.

I no longer receive packages from UPS or FedEx since they are actually
Al Qaeda in disguise.

I no longer shop at Target since they are French and don’t support our
American troops or the Salvation Army.

I no longer answer the phone because someone will ask me to dial a
number for which I will get a phone bill with calls to Jamaica, Uganda ,
Singapore, and Uzbekistan

I no longer buy expensive cookies from Neiman Marcus since I now have
their recipe.

Thanks to you, I can’t use anyone’s toilet but mine because a big brown
African spider is lurking under the seat to cause me instant death when
it bites my butt.

And thanks to your great advice, I can’t ever pick up $5.00 I dropped in
the parking lot because it probably was placed there by a sex molester
waiting underneath my car to grab my leg.

I can no longer drive my car because I can’t buy gas from certain gas
companies!

If you don’t send this e-mail to at least 144,000 people in the next 70
minutes, a large dove with diarrhea will land on your head at 5:00 PM
this afternoon and the fleas from 12 camels will infest your back, causing
you to grow a hairy hump. I know this will occur because it actually
happened to a friend of my next door neighbor’s ex-mother-in-law’s second
husband’s cousin’s beautician…

Have a wonderful day….

A South American scientist from Argentina, after a lengthy study, has
discovered that people with insufficient brain activity read their
e-mail with their hand on the mouse.

Don’t bother taking it off now, it’s too late.

How do you like that one?  Can you relate, too?  The Neiman-Marcus cookie one always gets me because that has been an urban legend for over 20 years, before most of us were even using email!  I remember reading it as a xerox copy someone left in the nurses’ break room at the hospital in 1988!  And yet it still circulates.

The one I am getting now from many people is the one claiming James Dobson is warning us about atheists lobbying Congress to ban religious programming from television, or something like that.  Some ask for you to sign your name like a petition to send Congress or something.  Anyway, whenever I get an email like that, I don’t forward it before I check it out.  (The few times I didn’t check first led to my embarassment when I found out they were bogus.) My favorite urban legend site is www.snopes.com  They have hundreds of “Forwards” you can check out.  Some are true, but most are false.  Some are partially true.  They will tell you the orgins on some of them.  Snopes also provides further sources to check out.  For example, with this atheist/television/James Dobson bogus email, they provide Focus on the Family as one of the sources.  If you go to Focus on the Family’s website, you will find what James Dobson says about this particular email and others that are out there, floating around.  Dobson goes as far as to say forwarding bogus emails is a sin!  He equates it to gossip and bearing false witness.

One thing I told you guys when I asked for your emails is that I wouldn’t forward things to you unless you did it to me or unless you indicated you enjoyed the jokes.  I will continue to honor that and not send forwards since I don’t like to receive them myself (unless it’s a good joke or funny picture.)  So far my luck has held out despite all the emails I didn’t forward to others and I’m pretty sure Jesus still loves me even though I didn’t tell 25 people about it.

But…keep those OTHER emails coming (especially the questionnaires and pictures for the class DVD!!)

Burke was featured on television this am.  One local TV show does what they call “High School Cribs” where they feature an area high school.  What was cool about this spot was it did a separate piece on the band.  Check it out!  Mike is the trumpet they zoom in on next to his friend, Katelyn, who smiles at the camera.

(Click on “Burke extra band.” There is a short ad beforehand which is louder than the regular piece.)

Hi, All!  Saturday, a small group of us met at Fann’s house before the football game.  I wanted to get some input to find out if I was on the right track or not.  It was great to see everyone on the cold, windy November day.  Maggie made brunch for us and we visited for about an hour and a half or two hours.  As you can see by the picture, I have been “working my fingers down to the bone” on this reunion! 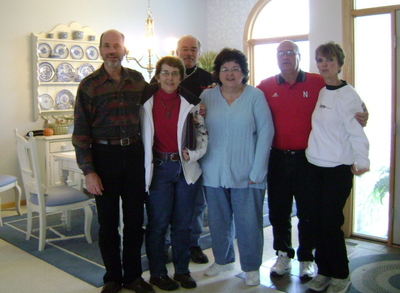 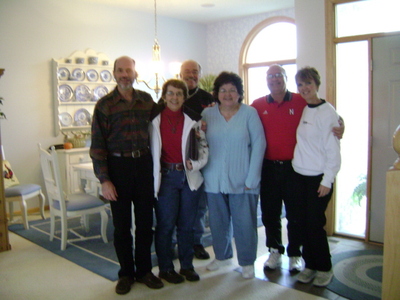 Bill has joined the Hasting Symphony Orchestra, so he showed us his new French horn. It’s pretty fancy–silver. We didn’t ask for a demonstration.  We should have! 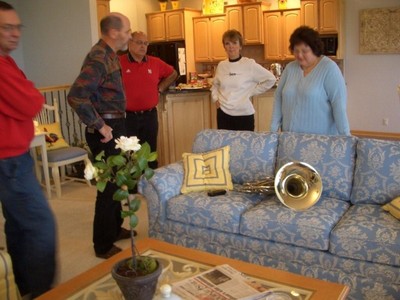 It was a good Saturday.  NU won their football game, too, so all was well with the world.  Thanks to Deb, Nick, Chuck, and Bill (and especially Maggie for feeding us and opening her home up to us) for taking time out of their busy weekend to meet.

Keep those questionnaires and pictures coming!  Time is creeping up on us!

Send pictures of your Halloween costumes!  Here are some from Shelley in Arizona! 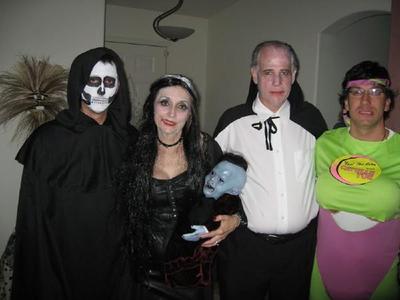 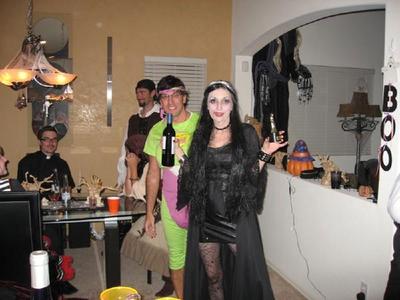 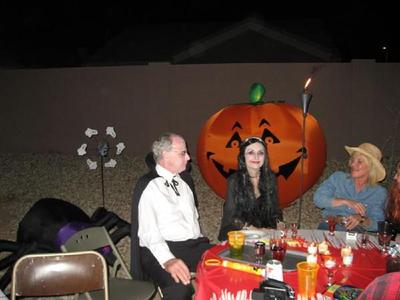 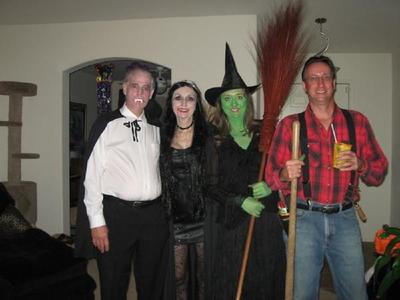