My brother, Fred, has been going through old family pictures and papers and scanning various things.  He says he is “organizing the archives.”  He has been emailing some of the items to me and it has been fun to go down Memory Lane as well as find a few surprises.  I don’t remember this particular picture, but it “hit home” with me.  (A little baseball metaphor) 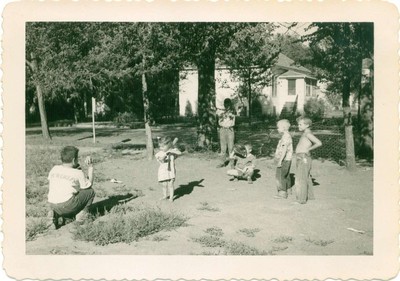 I am 2 1/2 years old in this picture, taken in North Platte.  My oldest brother, Jim, is pitching and Floyd is catching.  (Great stance! Plus, he can keep the sun out of his eyes.) I don’t know who the spectators are (except for my dad in the background under the tree).  I suppose they were neighbor boys out to see if a girl could hit.  I didn’t realize I was a “lefty” back then, but now I understand why I love baseball so much.  I started out at a very young age!

Being raised with four brothers, I had no choice to love baseball and other typical “boy” games.  I was an ace at marbles and loved ending a game with more marbles than the guys.  There were very few girls in our neighborhood in Cozad where we lived most of my early childhood years, so I was stuck with the boys.  I learned to hold my own and could go up against the best of them!  I remember playing basketball with our neighbor boy, Bob, for hours!  I played a pretty decent game of “horse.”  Of course, now I can hardly get a basketball over my head!

In school in the 1950-60’s, girls didn’t have the opportunities to participate in sports like the boys did, so I had to be content to watch more than play.   I went to Floyd’s Little League games in Cozad and didn’t miss the American League games when we moved to Broken Bow.  The girls went to the games to watch the guys, but I sat with my scorecard, marking the strikes and runs, keeping track of batting averages, RBIs and pitching. Once in awhile, I would agree with the other girls that “that shortstop sure is cute.”  Some players were a little more distracting than others.  We tended to like the pitchers, but now and then girls watched a baseman or outfielder pretty closely!  (The outfielders were harder to see, though, so usually the infield was ogled more.)  If I mentioned that a player had an average of .215, though, the girls’ eyes glazed over.

Baseball is the one sport I enjoy at all levels.  I love Little League, American Legion, college and pro baseball.  Besides growing up with four brothers, I also raised three sons, so the male-dominated household continued as did the baseball games.

When we first moved to Chicago, one of the first outings I had with the boys, then 12, 10 and 5 years old, was to  Wrigley Field.  The Cubs were away, so we were able to take a tour which included the bullpen, locker room, press box, and scoreboard.  (Remember, Wrigley has the old-fashioned scoreboard where the numbers are changed by hand.  The guys inside must get pretty hot some days!) We also got to run the bases!  The boys loved it, as did I.  It is a memory that we will carry for our entire lives.  The drive home was painfully long with stop-and-go traffic, taking us 3 hours to get home (a 45-50 mile drive), but it was worth it for the memories we created.

Chicago is such a great baseball town.  It was fun living there just for the sports.  Near our suburb there were two minor league teams, the Kane County Cougars and the Schaumburg Flyers.  The Flyers weren’t there until our last year so we didn’t see them play, but we went to many Cougars games.  The Kane County Cougars is a farm team for the Marlins.  Every Mother’s Day, the boys and I (and Dennis) headed to the Cougars game.  It was so much fun!  Friends thought it was strange that I would go to a baseball game on Mother’s Day! They thought I was humoring my boys.  But, that is what I wanted to do and we had such a good time.  We went to the Cougars games throughout the summer.  We even had our office picnic there once and it was a blast!  The Cougars had a great field, perfect for families and corporate events.  Beyond the outfield was open where people could picnic and watch the game.  Large barbecue pits and big tents stood outside the stadium.  The smells and sights of all that activity added to the excitement of the game.  They also had plenty of between-inning entertainment, with the frisbee-catching dog, the race of the mascots, the chicken dance and the macarana.  On Mother’s Day, each mother was given a carnation.  A lot of the games had some special prize or fireworks for the spectators.

We also went to White Sox games.  (I know.  I admit it.  We are avid Cubs fans, but we also sat in the seats at Comiskey now and then.)  The White Sox were pretty bad when we lived in Chicago, so we often found free or greatly discounted tickets.  We didn’t care!  It was a baseball game!

The White Sox and Cubs are totally opposite.  The White Sox are more like the working man’s team, the blue collar team, whereas the Cubs are more “preppy.”  The fans at the White Sox games can get pretty rowdy and have been known to be thrown out of the stadium for fighting.  But, when we were there, there was plenty of room and not much contact with other fans!

Another difference – Comiskey is modern and has the feel of a shopping mall.  There is a food court on each level and lots of stores.  Wrigley is an older stadium with lots of tradition.  They have the Bleacher Bums in the far seats, which have their own “culture” going on.  There is even a play about the Bleacher Bums!  At Wrigley, surrounding buildings and apartments have seating on the roofs.  These seats aren’t free!  They are an extension of the stadium in a way (although I’m pretty sure they aren’t managed by the stadium).  Wrigleyville is a safe neighborhood whereas Comisky (now US Cellular Field or “the Cell”) is located in an unsavory part of town.  One does not stray far from the stadium grounds without taking great risk!  It is best to pay the $20 (or whatever it is now) and park at the stadium where there is security than to try to park on the street and risk getting mugged or worse.  Chicago’s southside can be dangerous.

It’s harder to get Cubs tickets and Wrigley is usually packed.  The White Sox games usually have plenty of empty seats.  (It is a larger stadium)  It is ironic because the White Sox won the World Series in 2005 and the last time the Cubs won was in 1908.  The Cubs fans are loyal (but maybe a little naive!)

Back in Omaha, home of the College World Series, the baseball fever continues.  We didn’t make it to any CWS games this year, but the boys and I followed it closely.  We make it to some Omaha Royals (minor league) games now and then.  It is nice to see that the games are getting a little more exciting with more going on between innings than in the “old days.”

So, summer is here and the “boys of summer” are back in full swing.  For now, I am content to watch WGN and listen to Bob and Len banter back and forth about our Cubbies.  “Go Cubs Go!”  But, maybe I’ll make it to a live game again this summer.

Take me out to the ballgame!