Mother Nature is toying with us here in the Midwest.  We have had below freezing temperatures for a long time but with sporadic nice days.  All week will be 5 below, then suddenly one of the days will be 40-50 degrees.  Almost balmy.  Only to return to the below freezing temperatures again.  We had a beautiful weekend.  Yesterday reached 50 degrees!  People were going without coats.  Today we are back to gloomy, snowy weather.  Nature is playing a nasty hoax on us.  I guess it gives us a day to get the car washed, then back to the slush and salt again.  The lines at the car washes remind me of the lines at Disneyland!

We celebrated Joe’s roommate’s birthday this weekend by meeting the kids at the Brazen Head.  There was quite a crowd for Jeff’s birthday.  He turned 22.  “Ellis Island” was playing, so we had a great time, drinking Guinness or Smithwicks or Bass ale and singing along to the music.  There was a lot of audience participation as usual.

Our oldest son, Dave, and his wife flew to Rome for vacation yesterday.  They left Chicago around 2:00 in the afternoon.  I just heard from Dave.  They waited to call rather than calling us in the middle of the night (our time) when they arrived.  It was a nine hour flight from Chicago to Milan, then they changed planes after an hour layover.  They have bad jetlag right now since they weren’t able to get any sleep on the plane.  I think they will be better tomorrow and can start their “Rome Adventure.”

I haven’t received anymore “Return to Sender”s so I think Kerry Harris and Mike Horn are the only incorrect addresses we have.  I did find out I may have incorrect addresses for some people whose e-mail address I have.  I tried to send Shelley some “snail mail” and it came back to me.  Since we have been communicating via e-mail, I hadn’t realized I didn’t have her correct address.  If you suspect I may not have your current address, please let me know.  We will be sending out questionnaires for the booklet in a few months, so I want to make sure we have current addresses.  Keep sending pictures!  I haven’t gotten any in awhile.  We want old pictures, recent pictures, family pictures…whatever you want to share with us.

I hope you are warm and happy wherever you are.  (Kind of like Charles Schultz’s “Happiness is a warm puppy.”)

I have been communicating with the Arrangements Committee about the basic plan for our reunion next year.  Based on the e-mails I have received, it looks like we will follow the same format as in the past with a barbecue Friday night and a banquet on Saturday.  We will let you know more as details unfold.  Please send me any ideas you may have.

It has been a lonely weekend.  Dennis has been in Valentine visiting his mom and good friend, Gene.  He left Thursday afternoon and is due back today.  By chance, his classmates got together Friday night to plan their reunion.  (Dennis was in the Class of ’68 in Valentine.)  Dennis has never gone to a class reunion, so it was kind of a surprise that he happened upon this.  He enjoyed visiting with former classmates, most of which he hadn’t seen in over 35 years.

Dennis and I are opposite when it comes to reunions.  He says, “Why should I go to a reunion?  I don’t know those people anymore.”  I, on the other hand, like to go back and see old friends.  Even though we are different (hopefully!) than the 16-18 year olds we once were, I like to catch up on people.  I feel you all were important to me at a time in my life when things were new and exciting as well as turbulent and CONFUSING!  We share that human experience of adolescence!  We helped each other get through those times (although sometimes we may not have helped as much as we could have.)  Dennis said he enjoyed seeing his classmates and prefers smaller groups like that than one big reunion.  I, on the other hand, say, “The more, the merrier!”

We celebrated Valentine’s Day on Wednesday since he was leaving the next day.  I work long hours on Thursdays so I knew we wouldn’t have much time to celebrate anyway.  We went to Kobe’s, a Japanese restaurant where the guys throw knives and spatulas around while they cook your food in front of you.  It was fun to watch.

Mike was gone quite a bit this weekend, so I came home to an empty house Friday and Saturday.  He went to the academic decathlon (as a spectator) at Creighton University.  He and his friends cheered the Burke team on.  It must have helped because Burke came in first!  They will be going to California for the Nationals.  Burke beat out Creighton Prep.  Burke also won last year.  Who says public school kids aren’t as smart as private school kids?!

Keep those pictures for the DVD coming!  We want past and present pictures, family pictures, grandkids, whatever you would like to share.  E-mail or mail them to me, Janice, Cheryl or Bill F.   I’m no longer putting all the pictures we receive on the blog because we want a few to be ones you haven’t seen yet.

After I got off work Friday evening, Dennis and I drove downtown to the Holland Center to a concert.  We saw Ladysmith Black Mambazo.  They are the South African group who sang on Paul Simon’s “Graceland” album.  Their name comes from different things…Ladysmith is the name of the town they are from, Black represents the black oxen, considered to be the strongest animal, and Mambazo refers to an ax, sympbolic of the group’s ability to “chop down” the competiton.  Their leader, Joseph Shabalala, started the group 47 years ago!  He has got to be pushing 70, yet he is very active and is the lead singer of the group.  They sang a cappella the entire two hours!  Plus, did a little dancing.  They can kick as high as the Rockettes!  Anyway, we enjoyed the concert very much.  The audience was very diverse with all ages, even teenagers, well dressed and those in jeans, all races.  It was interesting to see.

Saturday, I met Maggie (Bill F’s wife) for lunch at Wheatfield’s.  She was in Omaha singing with people at Cathedral whose mission is to preserve sacred music.  Maggie has even learned Gregorian chant.  How cool is that?!  Not being a singer myself, I admire people who have that talent.  We had a nice visit and delicious lunch before she headed home to Lincoln.

Sunday was the Burke jazz band dance at the Marriott.  The jazz band is going to Chicago in March so this was a fundraiser for the trip.  We had a great turnout.  I was co-chair for concessions.  We sold cookies and punch.  During the planning, someone suggested we just ask for a goodwill donation for the concessions. That idea didn’t fly.  Like another mother of boys said, “Have you ever seen boys descend on a plate of cookies?”  We got the cookies from Pettit’s bakery and they were wonderful.  The sugar cookies were cutout into shapes, guitars, trumpets and saxophones.  The kids loved them. The bands played from 2:30-5:00.  The junior high and grade school jazz bands played first, then the Burke jazz band.  They were really good.  I was a little nervous that the grade school kids wouldn’t be able to play as well, but they held their own!  They all did real well.  The Marriott was great, too.  We were in the ballroom.  Everything looked very classy.  Most people didn’t dance, but there was a small dance floor available for those who wanted to “cut a rug.” 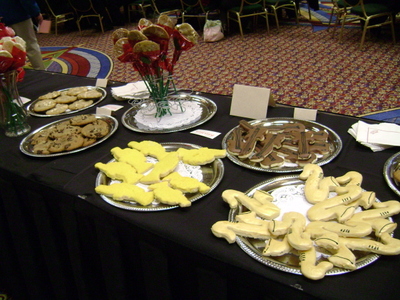 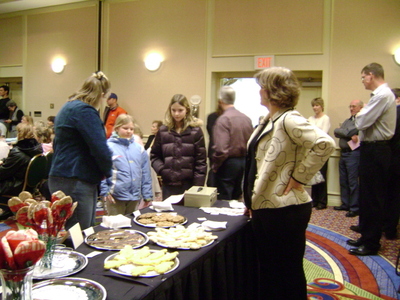 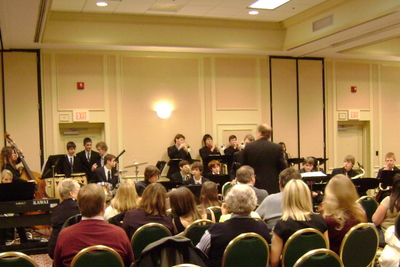 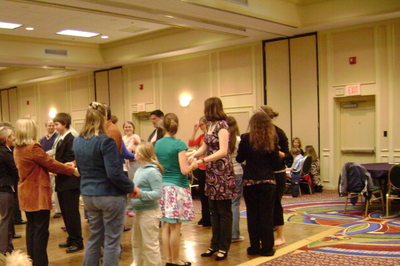 Today is Mardi Gras as well as “Super Tuesday.”  Or, as my teenaged son calls it, “Super Fat Tuesday!”  Hard to believe we’re just six weeks away from Easter!

Saturday was my birthday (Groundhog’s Day.)  I have been fighting a cold, so the celebration was rather lowkey.  I have made it another year (!), outliving my mom and older sister.  Since I’m a Groundhog baby, I have decided to follow the lead of the movie that stars Bill Murray, and just keep repeating my 40th birthday.  I’m not sure I want to wake up to “I Got You, Babe” every morning, though!

Keep those birthday and anniversary dates coming! February Birthdays and Anniversaries are: