I received notice from Judy M that Mary Blair’s mother died.  I don’t know if you all remember Mary.  She moved away when we were in 7th or 8th grade.  Her dad was a doctor and they moved to Grand Island, I think it was.  Arlene Blair died August 23 at the age of 90.  She had been living in California (Napa) with her children after her husband died.  Mary lives in Napa.

Then, Harry Purcell died last week in Livermore, California.  Last week’s Chief had a nice obit, plus Deb wrote a wonderful tribute to her dad.  They also published a letter from Harry that he wrote at the 100th anniversary of the Custer County Chief. You can see the tribute at www.custercountychief.com

Bill F was in Argonia, KS for a rocket launch event recently.  Bill enjoys flying remote airplanes and firing off rockets.  His certification flight for the high power Level 1 certification was a success.  Certification allows him to legally buy and fly smaller high power rocket motors.  Level 2 and 3 are in his sights for the future.  He bought a rocket kit at the launch for Level 2 certification.  It is about 8 feet tall and 4 inches in diameter. 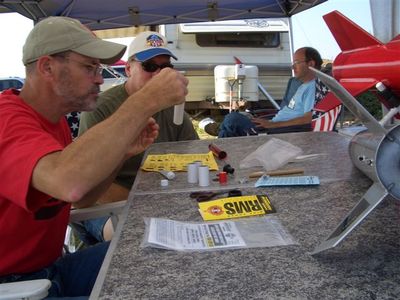 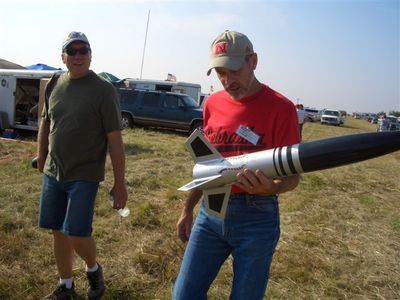 I visited with Hob last weekend.  I stopped by his house because he told me he had some Senior class pictures I might be able to use.  Turns out I already had the ones he had, but it was fun chatting for awhile anyway.

Most of the Senior pictures for the reunion booklet are scanned.  Thank you to Lana, Opal and to Deb and Frank for the pictures they gave me.  I am missing 15 original Senior pictures.  I went ahead and scanned them from the yearbook.  (Thanks, Frank, for the use of your yearbook.  Mine was lost in the flood a couple years back.) The yearbook ones look a ittle grainy, but they will do in a pinch.  The ones that I am missing (and I took from the yearbook) are: Ken B, Jerry C, Scott F, Dick H, Silver, Johnny J, Jim L, Randy L, Dave N, Ivy,  Daryl S, Ron S, John St, and Jerry W.  If anyone has these Senior pictures, can you get them to me?

We had a fun weekend.  No rain this weekend.  We went to the Burke-Millard West football game Friday night.  Millard West is ranked #1 in Omaha and Burke is #5.  Burke got trounced soundly, but did manage to score a few touchdowns.  In fact, we thought we were going to be OK when Burke scored in the first two minutes of the game!  But, Millard West caught on to our tricks and soon had us under their thumbs.  It was exciting for us band parents because it was our first opportunity to see the marching band in their new uniforms!  Finally!  The band did a great job at halftime.  After their performance the student body chanted, “Epic! Epic!” from the stands. 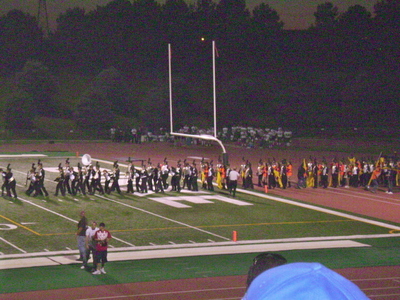 Saturday night we met friends at the Brazen Head to see Ellis Island play.  That band is becoming ‘way too popular here!  We had  a little trouble getting a good seat.  We started near the front of the pub where there is no view (but you can hear pretty well.)  Plus, people towards the front of the pub tend not to participate in the music, so it’s no fun there.  The good thing about the Brazen Head is it is fairly “fluid,” and I’m not talking about the ale.  The crowd usually moves around, so seats open up throughout the evening.  They have a beer garden where people come and go, so there is a lot of movement in the place.  Plus, the “regulars” tend to know each other and offer seats.  Joe’s friend, Kristen, was there with her family, celebrating her birthday.  So, we joined them eventually.  Kristen’s parents brought a birthday cake for Kristen and Dave, one of the musicians.  His birthday was today. 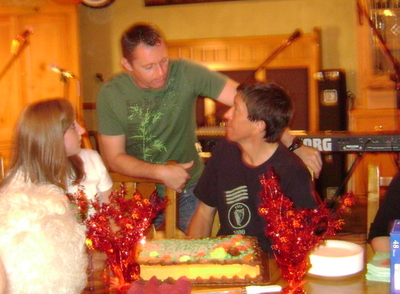 Our Mike and his friend, Jamie, were with us and Joe showed up later.  When Joe came in, everyone yelled, “Joe!” Mick Doyle from “Ellis Island” said it reminds him of the old TV show “Cheers” and Norm! 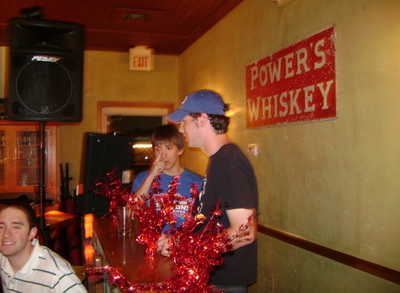 It was fun evening and “Ellis Island” made Kristen’s birthday special by doing a lot of special songs and teasing her a lot.

We found out that they were playing at the fall festival at Mount Michael monastery today, so we decided to go see them again.  The festival was pretty cool.  We didn’t stay long enough to enjoy the entire festival because Anna was on her way to our house (unbeknownst to us until the last minute.  Mike forgot to tell us!) We watched “Ellis Island” play. We tried to liven up the crowd by doing all the audience participation things.  You could tell these people weren’t used to singing along or clapping and responding to the band, but we got a few of them going.  “Ellis Island” wore their kilts.  We joked that it was pretty windy to be wearing kilts!  Somehow they managed to stay put, though.  What was kind of amazing was, Dave, who plays several different musical insturments (10-12, I think) played the hammer dulcimer with two pencils!  On Saturday, he played in Greeley at the Irish festival and left his hammers there.  When he played at the Brazen Head he discovered he didn’t have his hammers, so one of the patrons ran over to a store and bought his some pencils.  It was amazing how he adapted.  Today one of the pencils flew out of his hand and I joked he was doing a David Letterman impersonation.

The fall festival was really cool.  They had lots of old fashioned games like a cake walk, a pie toss, pickles, things you would’ve seen in the old days.  They had lots of food and we bought a couple enchiladas and corn on the cob.  The corn was grown there at the monastery.  It was real good.  They also had apple treats made from apples picked from the orchard.  There were burgers, brauts, corndogs, pork sandwiches, pizza, ice cream, and drinks.  Most of it was homegrown or homemade stuff.  they also had a carnival.  Mount Michael’s has a residential boys’ high school, so a lot of parents chip in and help out.  It’s a huge fundraiser for the school.  They had a farmer’s market and quilts to raffle.  Lots of things for the kids like the bouncing things similar to the Whopper Hopper.  They also had hayrack rides that took people around the grounds as well as to the Elkhorn River valley..  There probably was more to see, but we didn’t stay long enough to check it all out. 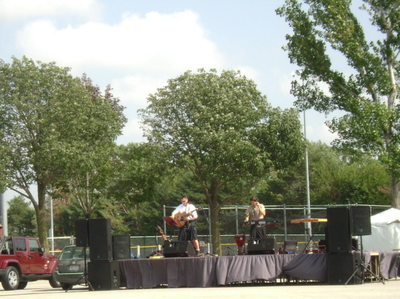 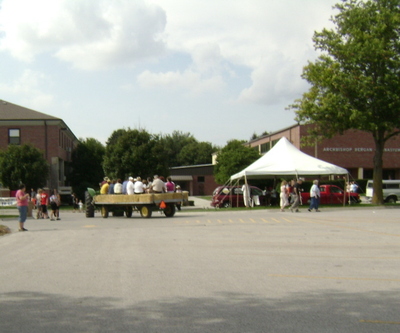 One of the hayracks at Mount Michael

Thursday we had Open House at Burke.  The jazz band played for awhile before we went off to meet the teachers.  It was kind of exciting because we signed the papers so the counselors could release Mike’s educational records to the National Merit people.  The counselor said to us, “There’s more to come!” meaning we will likely be signing more paperwork for various scholarships. 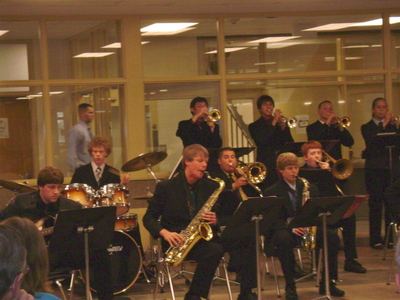 I’m back!  (Not that I went anywhere.  I just haven’t had time to sit down and update the blog.) Sorry about that!  Did you miss me?

My goal today is to work on the reunion booklet.  I still need information from you guys.  If you haven’t returned the questionnaire I emailed back in April, please do so.  It’s time to get serious about this thing or it won’t get done!  Also, we still need pictures for the DVD.  We have lots of pictures from a few people, but we need a few more pictures from people we haven’t received anything from yet.

This school year promises to be a busy one for us.  Mike is a Senior so we are doing all the college things.  He is also our last to leave the nest, so I feel like I want to participate in all his activities because this is my “last chance!” (Poor kid!  He will probably get sick of us!) Mike is receiving some merit awards, too, so that adds to our activity list.  He has been named a National Merit Scholarship semi-finalist, so will be taking the SAT to see where he places nationwide.

Homecoming is tonight, so this will be our first chance to see the Burke band perform in their NEW uniforms and their new program.  (Pictures to follow)  The dance is tomorrow night.  This entire weekend looks like a rainy one!  So, wet football game, wet halftime and no outdoor pictures for homecoming. (And, much to Dennis’ chagrin, the lawn will only grow longer and be too wet to mow!)

We are done with school physicals at work at last!  It has been a stressful summer.  So many kids to see, and no time to see them!  I thought summer was suppose to be a time to ease back and relax. Not at our office!  Parents get very testy when we can’t “squeeze” their child in for a last minute sports physical.  Kindergarten and junior high physicals are the worst to schedule because they require more time.  If parents don’t call for their appointments by May, it’s pretty hopeless.  We encourage people to start making the appointments in March, but many don’t call until summer.  Anyway, we are glad that is behind us for another year!  Now, we are gearing up for the flu season. We are all required to work 16 extra hours in order to get all the flu shots given!

Because of all the things at work, we have been doing fun things, too, to balance out the stressful things. We had our “Back to School Lunch” last week.  We brought in sack lunches and exchanged them.  My lunch won this year.  It was voted “Most Creative.”  I made little cheese, ham, pineapple kabobs instead of a sandwich.  I put in a “note from Mom.”  I made “ants on a log” (peanut butter celery sticks with raisins–although I didn’t have raisins so I used chocolate chips).  It was fun.  We also had awards for “Most Nutritious” and “Most Ordinary” lunches. The staff voted on the lunches and I had little plastic trophies to give out.

Next week we will have “Talk Like a Pirate Day.”  I will get out our pirate hats from last year and we will give little telescopes and eye patches to the kids.  Since we seem to like to have lunch, I told everyone to bring “pirate food” on Friday.  Lots of limes!  We’ll see how that turns out.

Did you know there is an International Talk Like a Pirate Day?  It’s September 19.  You can check it on the internet.  Just google it and you’ll find lots of websites including the “official” site.  A few years ago, Dave Berry wrote a column about it.

The cats are glad Joe is living at home again.  They are getting a lot more attention.  Even our standoffish cat, Pepper, loves having him here.  She follows him around the house and wants to be where he is. 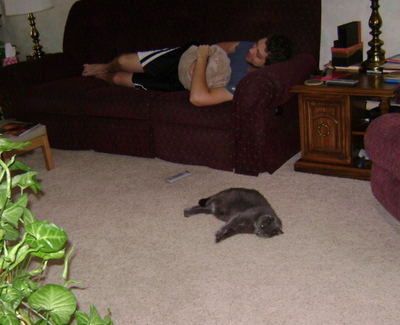 It’s kind of nice having Joe around again.  He has matured so he is helping more than he did last time he lived with us.  He takes Mike to work, buys some of his own groceries, does his own laundry, and cleans up (somewhat) after himself.  He’s a lot of fun to be around.  He, Mike and I like to watch the Cubs games together.  We have a great time.  I always say that if and when Joe gets married, I want the mother-son dance to be “Take Me Out to the Ballgame.”  We both love baseball!